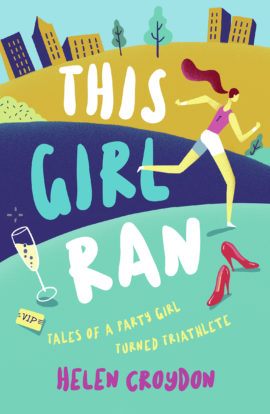 Longlisted for the William Hill Sports Book of the Year 2018

If you had told Helen two years ago that she would be getting up at 6 a.m. on Sundays to swim in a freezing reservoir and spending her Saturday nights unshowered and covered in mud in a pub, she would have spat out her champagne. But when everyone around you starts settling down, what else is a glamorous party girl to do but to launch herself into the world of endurance sport?

For someone who didn’t even own a pair of flat shoes (and definitely no waterproofs), Helen would soon find she had a lot to learn.

Join Helen on her hilarious and soul-searching journey as she swaps a life of cocktail bars and dating for the challenges and exhilaration of triathlons, trail runs, obstacle races, long-distance cycles and ocean swims… and sets herself the seemingly impossible goal of qualifying as a Team GB triathlete.

'Helen's portrayal of her transformation through running is utterly brilliant. It's warming, funny and extremely relatable!'

'This has to be one of the most enjoyable running related books I have ever read. It is incredibly well written and brilliantly captures why so many people of all abilities take up running or triathlons in the first instance…I found myself captivated, nodding along in agreement and smiling to myself as I recognised so much of what she described.'

'Proof that we can all surprise ourselves and those that know us. A great tale with honesty and plenty of humour. I might get my running shoes on yet…'

'A chatty, and sometimes racy, account of going from glamour girl to GB triathlete.'

'I love Helen Croydon's honesty. It makes me connect with every word she writes!'

'The writing style and narrative really drew me in. I was completely hooked and read the entire book in the space of 4 sittings. I would probably have devoured it whole if I didn’t have a tiny human to look after!'