David Treanor, the author of Mission Mongolia: Two Men, One Van, No Turning Back, was at the start of this year’s Mongolia Charity Rally this weekend to send the teams on their way with a few words of encouragement — and a bit of light-hearted advice.  Treanor told the teams, gathered at Horse Guards Parade in central London on Saturday, to talk football to get themselves out of any sticky situation with Russian police — and to stock up on breakfast bars before they set off.  The event is run by the adventure charity, Go Help, which bought copies of the book to give to each of the teams to take with them on the trip.  Around two dozen vehicles left London bound for Ulaanbaatar, a mixture of ambulances and vans. The ambulances will be deployed in Mongolia under a scheme run by Go Help, while the commercial vehicles will either be donated to local communities or NGOs, or sold to raise cash. 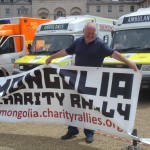 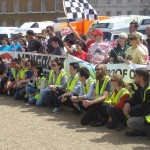 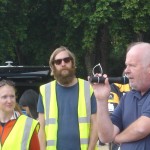