David Treanor at the start of this year's Mongolia Charity Rally 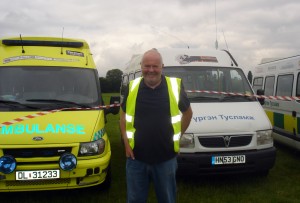 Summersdale author David Treanor was at the start of this year’s Mongolia Charity Rally to send the teams on their way with a few words of encouragement — and some personal tips. Treanor, whose book, Mission Mongolia — Two Men, One Van, No Turning Back, is an account of a similar journey, told the teams that to get through they needed the three ‘Bs’ — beer, breakfast bars, and bungs for the ears to counter the effects of snoring team-mates.  The vehicles, which set off on the ten-thousand mile journey from Woburn Safari Park, included a homemade buggy, a mobile dental surgery from Germany and around a dozen ambulances which will be used to support the work of the British adventure charity, Go Help.   Treanor said: ‘I could understand the feelings of those about to embark on the trip — a mixture of excitement and apprehension, worries about bent cops and border guards and concern over how they’ll cope crossing mountains and deserts when the roads run out completely.’