It’s not often that the whole company vacates the office to spend the afternoon at the beach, but when it does, it’s in the name of a good cause. The Great British Beach Clean is an initiative organised by the Marine Conservation Society. It forms part of Beachwatch, the national beach cleaning and litter surveying scheme, which is focused on tackling the growing issue of marine litter. Last Friday, Summersdale swapped desks and paper for bin bags and litter pickers, and joined the thousands of volunteers across the UK who pitched in for the weekend’s clean-up operation.

With temperatures during the week reaching the hottest that September had seen for 100 years, there was some debate as to whether we’d be picking our way around beach-goers, buckets and spades. But, come Friday morning, the heavens had opened, the temperature had dropped and normality had been restored: anticipating both the rain and the cold, we were feeling suitably British as we made our way to East Head.

On arrival, it didn’t look as if there was any work for us to do. The beach wasn’t a dumping ground for old car parts and trolleys, nor was it riddled with crisp packets, bottles, or snarls of six-pack rings. It was sand and sea and dunes and sky; East Head appeared to be perfectly clean. But, as our guide from the National Trust told us, on closer inspection this was not the case. Hidden amongst the seaweed and shells were cotton bud sticks, small pieces of fishing rope, dental floss, broken pieces of rubber and wood, and tiny particles of plastic, some less than a centimetre in size, and all of them a danger to wildlife. 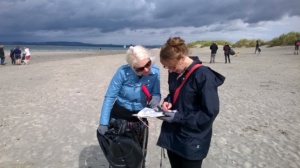 But the GBBC isn’t just about clearing litter. As well as being provided with bin bags, sturdy gloves and litter pickers, we were given clipboards and log-sheets so that we could catalogue what we found. All the data collected over the weekend from across the country will be sent back to the MCS and will contribute to an annual report on the state of marine litter on British beaches.

We found an assortment of things over the afternoon, including long sections of rope, fishing nets, and a large cloth sack (which required the power of several Summersdalians to free from the sand). But the most abundant offender on the East Head stretch of beach was much smaller: nurdles. These plastic pellets, no larger than a lentil, are used as raw material in the manufacturing of plastic products. At first it was a challenge to distinguish these tiny particles from bits of broken shell, and they were well disguised by the sand. But once you found one or two they seemed to pop up everywhere. 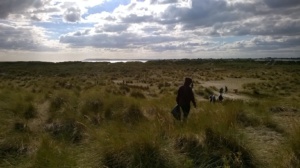 We spent an hour or so cleaning our survey section of open sand, and another hour combing back through the dunes. Litter picking was satisfying, and combined with the idyllic backdrop and breezy sea air, it was a wonderful afternoon. It was a great feeling to do our bit for Mother Nature in such a refreshing setting. But it was also a sobering experience: from a beach that at first appeared to be clean, the Summersdale team alone managed to collect 12 kilograms of litter in the space of one afternoon.

Sadly, this amount of debris isn’t surprising. Since 2001, levels of marine litter have doubled, and the toll that this is taking on sea life is a serious one. In October 2014, a report by Surfers Against Sewage revealed that over one million sea birds and 100,000 marine mammals die annually from ingestion of and entanglement in marine litter, highlighting with painful clarity that more wildlife than ever is being harmed by the levels of pollution in British seas.

However, despite these worrying statistics, initiatives like Beachwatch can help us to remain positive. Beach cleaning events such as the GBBC keep tabs on levels of marine litter, and they are key in identifying ways to minimise future pollution. Furthermore, with the majority of marine litter originating on land, the beaches are the best place to start in order to tackle the problem.

Although the current state of our seas is worrying, there is hope for the future. The fact that East Head is 12 kilograms cleaner may only be one drop towards solving an ocean of a problem – but what is an ocean but a multitude of drops?