A Hedgerow History of Halloween 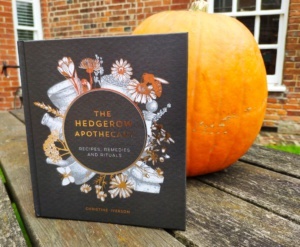 Other names for Halloween include Samhain, All Souls’ Night, November Eve, Ancestor Night, and Apple Fest.

HISTORY: The tradition of Halloween, celebrated on 31 October, is widely believed to have come from America, but it actually originated in Britain. It grew out of the ancient Celtic festival of Samhain, which was one of the major events of “The Wheel of the Year”, marking the end of the light half of the year and the beginning of winter.

Samhain was the Celtic harvest festival, when all crops of barley, oats, apples, turnips and wheat must be gathered in. With the arrival of November came the faeries who would blast every growing plant with their freezing breath, ruining all that was left in the fields or hedgerows. With barely enough food to survive the winter, the Celts would have to kill most of their cattle and store the meat as best they could; this meant that Samhain was also a night of great communal feasting.

Halloween started to become Christianized in the Middle Ages in an attempt to blend pagan customs with Christian ones. The date of 1 November became “All Saints’ Day”, having been moved from 13 May by Pope Gregory III in a deliberate attempt to hijack and disrupt any pagan celebrations. Bonfires had been important at this time of year and were used by the Celts to burn the harvest chaff and purify the land ready for the next season of growing. Later, bonfires were also seen as a way of helping to guide Christian souls out of purgatory or as a means of protection from witchcraft and the plague.

A tradition that began in the Middle Ages and lasted until around the eighteenth century was “souling”, whereby children went from house to house singing rhymes and saying prayers for the dead in return for food. The soul cakes they received as payment for their songs meant that a soul was freed from purgatory and could ascend to heaven, and this was possibly the origin of trick or treating. In 1891, the Reverend M. P. Holme of Cheshire wrote down this traditional souling song, told to him by a little girl from the local primary school:

One for Peter, two for Paul,

Three for Him what made us all!

FOLKLORE: Love divination was very popular on Halloween; young girls, desperate to dream of their future husband, would put a sprig of rosemary and a crooked sixpence under their pillows. Alternatively, they would peel an apple in one continuous strip and throw it over their left shoulder to reveal the initials of their future love. The custom of carving jack-o’-lanterns goes back to the Irish legend of Jack, a lazy but shrewd farmer who tricked the devil into not sending him to hell. When Jack died, he was too sinful to be allowed into heaven and the devil wouldn’t let him into hell. So, Jack carved out one of his turnips, later to become a pumpkin, put a candle inside it and began endlessly wandering Earth for a resting place.

Extract taken from The Hedgerow Apothecary by Christine Iverson.