Christina Macdonald was editor-in-chief of Women’s Running for six years. She is now a freelance writer and has provided services for Dennis Publishing’s Women’s Fitness, as well as leading running brands including Ronhill. She was the launch editor of Women’s Running in 2009 and continues to write for the magazine on a freelance basis as well as remaining on board as contributing editor. In addition, she’s a qualified running group leader and personal trainer, as well as an accredited life coach. She’s passionate about running, and has completed ten half marathons and two marathons. 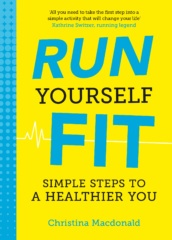