Reza Pakravan is a traveller, adventurer and film-maker. He holds the Guinness World Record for crossing the Sahara desert by bicycle: his preferred mode of transport. He has also cycled the Annapurna Circuit, the length of the planet from Norway to South Africa, and through the Amazon rainforest along the Trans-Amazonian Highway. In 2012, he was listed amongst the world’s top 20 most seasoned travellers by Men’s Fitness magazine. Reza is a patron of NGO SEED Madagascar and has received a prestigious Lloyd’s Charity Award for his work building schools and fundraising for Malagasy children. 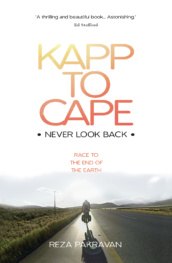 Kapp to Cape: Never Look Back