Samuel Alexander is a writer from the sunny north of England, who likes to claim he’s from Manchester simply because even most local residents don’t know where Mossley is. Samuel writes about all sorts, with LGBTQ topics often at the forefront of his mind, but he’s also been known to dabble in other topics for a variety of other media, from video game reviews and scripts to beard blogs (yes you read that right) and magazine articles. Samuel is also a passionate writer of fiction, with a current total of zero published works – ever the struggling artist. 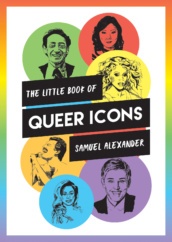 The Little Book of Queer Icons