Wilma Johnson is an artist and writer born in London in 1960. She has a degree in Fine Art from St Martin’s College of Art. During the 1980s she found inspiration for her paintings while hitch-hiking round Iceland and Lapland, Italy and the Scottish Highlands. In 1987 she spent a year travelling round Mexico and Guatemala, following the fiesta and painting in rundown hotel rooms. In 1991 she moved to a fishing village on the Dingle Peninsula in Ireland, where she lived for ten years, before moving to Biarritz in 2001 to become a surfer. She has three children and way too many animals. www.surfmama.me 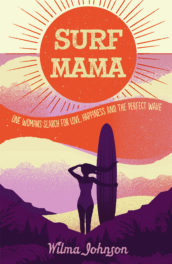