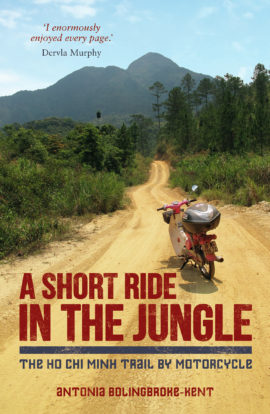 A Short Ride in the Jungle

‘For the first time in my life I felt that death was a possibility; a stupid, pointless, lonely death on the aptly named Mondulkiri Death Highway.’

The Ho Chi Minh Trail is one of the greatest feats of military engineering in history. But since the end of the Vietnam War much of this vast transport network has been reclaimed by jungle, while remaining sections are littered with a deadly legacy of unexploded bombs. For Antonia, a veteran of ridiculous adventures in unfeasible vehicles, the chance to explore the Trail before it’s lost forever was a personal challenge she couldn’t ignore – yet it would sometimes be a terrifying journey.

Setting out from Hanoi on an ageing Honda Cub, she spent the next two months riding 2000 miles through the mountains and jungles of Vietnam, Laos and Cambodia. Battling inhospitable terrain and multiple breakdowns, her experiences ranged from the touching to the hilarious, meeting former American fighter pilots, tribal chiefs, illegal loggers and bomb disposal experts.

The story of her brave journey is thrilling and poignant: a unique insight into a little known face of Southeast Asia.

Antonia Bolingbroke-Kent, a veteran of ridiculous adventures in unfeasible vehicles, is co-author of the successful Tuk-Tuk to the Road. Her articles have appeared in Wanderlust, The Guardian, Adventure Journal (USA), Verge (Canada) and Motorcycle Monthly, and she's also a regular speaker on the adventure travel circuit, speaking at the RGS, Adventure Travel Show and Wilderness Lectures.

'Elegantly written and modest about the bravery involved, the book deftly weaves together her trip with enough war history to provide context.'

‘Exceptionally well researched…personal, emotional…perfectly written, demonstrating just how travel by motorbike can be used to inform, educate and entertain the reader… a great book.’

'Thrilling and poignant: a unique insight into Southeast Asia'

‘Compassionately but without sentimentality, Ants describes lands victimised in the recent past by militarism at its worst and now assaulted by consumerism at its most ruthless. She also provides many entertaining vignettes of eccentrics met en route, disasters narrowly avoided and happy encounters with kind people in remote regions of wondrous beauty.’

‘Truly wonderful…a lovely book, very much after my own heart.’

‘A beautifully written tale teeming with descriptive gems and wickedly funny anecdotes, all delivered in an earthy, self-effacing style that has the words spilling off the page. Utterly absorbing and impossible to put down. A traveller’s delight and classic-to-be!’

‘Antonia Bolingbroke-Kent’s new book is a gripping travelogue which is at once both intimate and worldly-wise. Honest in her bravery (and brave in her honesty), she recounts a thrilling journey, not just through the splendour of South-East Asian landscapes, but also through the horror of Southeast Asian history – all atop the seat of the world’s most iconic motorbike.’

‘Ants has pulled off not only a demanding and original adventure but a great read too. A Short Ride in the Jungle informs and entertains in just the right measures, taking the reader on an action packed journey through Southeast Asia’s trails and jungles, as well its equally torrid history.’

‘An epic book about an epic trail. Bolingbroke-Kent captures the sights, sounds and colour of the legendary Ho Chi Minh Trail in all its surviving glory. And she captures it the only realistic way – on the back on an ageing motorbike.’