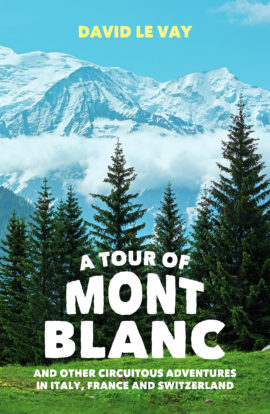 A Tour of Mont Blanc

And other circuitous adventures in Italy, France and Switzerland

Mont Blanc, or ‘Il Bianco’ as it is sometimes known as in Italy; The White One. It sits, regally, upon pleated glacial folds gathered together around a timeless, grey-rock body, high above the French town of Chamonix, lord of all that it surveys. It beguiles, bewitches and charms the lesser folk who seek to frolic and play amongst the buttressed foothills of its ancient frame, but exudes also a sense of foreboding; a warning to the one hundred or so climbers that die each year attempting to reach the gleaming, domed summit of this great snow-encrusted mountain.

Framed by the cobalt blue sky and golden alpine sun, Western Europe’s highest mountain has held a certain allure over explorers and hikers for centuries, playing host to the likes of Hannibal, Napoleon and the early pioneers of alpine exploration.

In a muddy field somewhere in Cornwall on New Year’s Day, two men make a pact to tackle it. Call it a mid-life crisis, with not only his daughter about to leave for university but also the rapidly approaching prospect of his fiftieth birthday to consider: walking 170 kilometres across a mountain range seems the perfect antidote. Humorous, reflective and poignant, this is the story of a journey around one of the world’s most iconic mountains, through an area that is full to bursting with stories to remember.