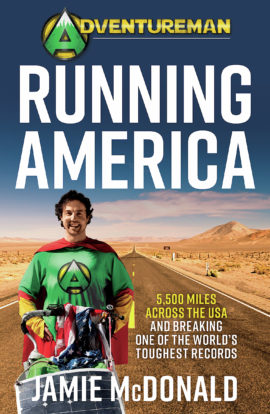 In 2018, Jamie McDonald embarked on his greatest adventure yet: running 5,500 miles (the equivalent of 210 marathons), solo and unsupported, coast to coast across America. An impressive feat for anyone, let alone someone who was told as a poorly child that they might never walk again.

Running through 22 states, Jamie battled 50-degree heat in desolate deserts, dodged rattlesnakes and mountain lions, had several near-death encounters and suffered an injury that left him no choice but to run 300 miles barefoot. Oh, and he did it all dressed in his superhero suit as his alter ego, Adventureman, to raise funds for sick children.

Though his journey was mentally and physically exhausting, America gave him the surprise of a lifetime, and the heart-warming kindness and generosity he encountered along the way gave him that glimmer of hope he needed to persevere against all odds. And as if that wasn’t enough, Jamie then took on one of his most demanding challenges to date – one which would require him to dig deep to find the secret of resilience, as he attempted to smash one of the toughest records on the planet.

Jamie McDonald is a world-record-holding adventurer, author, motivational speaker and founder of Superhero Foundation. He was the first person in history to run the 5,000 miles from the Atlantic to the Pacific coast without the aid of a support crew, raising more than £250,000 for sick children in Canada and the UK. He lives in Gloucester, and was voted one of The Independent’s top 100 happiest people in the UK.