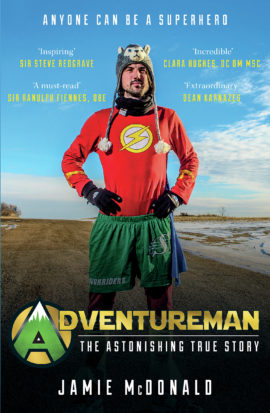 Anyone Can Be a Superhero

At the age of nine, Jamie’s family feared he would never walk again.
Twenty years later, he set off to run 5,000 miles coast to coast across Canada.

When Jamie decides to repay the hospitals that saved his life as a child, he embarks on the biggest challenge of his life: running the equivalent of 200 marathons back-to-back, solo and unsupported, in –40 degree weather, surviving all kinds of injuries and traumas on the road and wearing through 13 pairs of trainers. And he does it all dressed as the superhero, the Flash.

Though his journey was both mentally and physically exhausting, it was the astounding acts of kindness and hospitality he encountered along the way that kept him going. Whether they gave him a bed for the night, food for the journey, a donation to his charity or companionship and encouragement during the long days of running, Jamie soon came to realise that every person who helped him towards his goal was a superhero too.

Jamie McDonald is a world-record-holding adventurer, author, motivational speaker and founder of Superhero Foundation. He was the first person in history to run the 5,000 miles from the Atlantic to the Pacific coast without the aid of a support crew, raising more than £250,000 for sick children in Canada and the UK. He lives in Gloucester, and was voted one of The Independent’s top 100 happiest people in the UK.

‘Jamie is extremely tough. What he has put his body through both physically and mentally takes a tremendous amount of determination. Not many people could even attempt the challenges. Whether you’re 3 years old or 93 years old, we all dream of and long for adventure, but the way Jamie’s managed to combine it with fundraising and helping the world is inspirational. His book is a must-read for all!’

‘Jamie is the perfect example of a real-life superhero’

‘As a double Olympic champion, I know what it’s exactly like, to push yourself to the limit to achieve something incredible. And you’ve done just that. I could never do what you do – mad.’

‘I’ve done some pretty hair raising things in my time, but even I’m not daft enough to take on some of the challenges you’ve completed Jamie. And I’m Eddie The Eagle.’

‘Having run many marathons, the last thing I’d do is run across Canada. Jamie, you are proof that grit and determination are what you need to succeed.’

‘Jamie’s odyssey as he transforms himself from non-runner into trans-continental traverser by running across Canada will both amuse and amaze you. His call to follow his example and unleash your own inner superhero is one that’s hard to resist.’

Lisa Jackson, best-selling author of Your Pace or Mine? and Running Made Easy

‘Jamie is a real-life superhero. Not just because of being so selfless and raising a lot of money for charity but for doing challenges that are extreme and that any Olympic athlete would struggle with! A truly inspirational book that will touch people’s hearts across the world and hopefully encourage everyone to make selfless acts of kindness.’