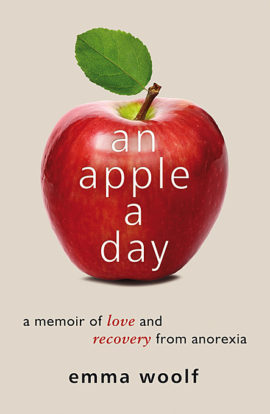 An Apple a Day

A Memoir of Love and Recovery from Anorexia

I haven’t tasted chocolate for over ten years and now I’m walking down the street unwrapping a Kit Kat. Remember when Kate Moss said, ‘Nothing tastes as good as skinny feels’? She’s wrong: chocolate does.

At the age of 32, after ten years of hiding from the truth, Emma Woolf finally decided it was time to face the biggest challenge of her life. Addicted to hunger, exercise and control, she was juggling a full-blown eating disorder with a successful career, functioning on an apple a day.

Having met the man of her dreams (and wanting a future and a baby together), she embarked on the hardest struggle of all: to beat anorexia. It was time to start eating again, to regain her fertility and her curves, to throw out the size-zero clothes and face her food fears. And, as if that wasn’t enough pressure, Emma took the decision to write about her progress in a weekly column for The Times.

Honest, hard hitting and yet romantic, An Apple a Day is a manifesto for the modern generation to stop starving and start living.

This compelling, life-affirming true story is essential reading for anyone affected by eating disorders (whether as a sufferer or carer), anyone interested in health and social issues – and for medical and health professionals.

Emma Woolf is the great-niece of Virginia Woolf. After studying English at Oxford University she worked in publishing, before becoming a full-time writer. She is a columnist for The Times and also writes for The Independent, The Mail on Sunday, Harper's Bazaar, Red, Grazia and Psychologies. She was a co-presenter on Channel 4's Supersize vs SuperskinnyNewsnight, Woman's Hour and Radio 4's Four Thought.

Emma's first book, An Apple a Day: A Memoir of Love and Recovery from Anorexia was published in 2012 and shortlisted for the Beat Award for Recovery Inspiration. She was also nominated for Mind's Journalist of the Year. She lives in London.

Review of The Ministry of Thin in The Observer: "Woolf sets her stall out with brio. [...] Woolf's skill in is in adding intellectual and emotional ballast to the debates that interest her. In its best moments, this book emerges as a hypnotist's finger-click signalling women to wake up."

‘Woolf bravely and publicly catalogues her journey to recovery from her eating disorder. It is very inspiring.’

'Frank and compelling... made me understand anorexia in a way I never have before.'

'Love your column… Read it religiously. Very positive. And brave.'

'An Apple a Day tells a powerful story, heart warming and heart rending by turns. It is ultimately a story filled with hope, and Emma Woolf's moving, deeply personal account of her journey out of anorexia will bring that hope to so many more people trapped by this dreadful illness.'

'There are many books written by people who have struggled with anorexia. Perhaps every heroic journey deserves the right to be heard especially by others who suffer, to know that they are not alone. By the same token these books need to be read by healers who seek to guide sufferers into a different way of life. Emma's book however differs from all the others I have read. It is not just Emma's elegant way with words, it is also her ability to document her thoughts and behaviour while also exposing them to her own insightful analysis and curiosity. I felt humbled, never having quite realized, despite my years of experience, the extent to which this illness can hold someone hostage to its power even when it is held up to the light of intense and public scrutiny. The one take-home message brought home to the reader is that healing anorexia is little to do with gaining weight; this will reduce some of the symptoms while at the same time making other life experiences feel infinitely more dangerous - like emerging feelings and the challenges of sharing your life with other people. It also proves that anorexia can only be properly faced, fought and even hopefully mastered when weight isn't dangerously low. I will recommend Emma's personal account to every therapist I train, while wishing her the happy ending she so clearly deserves.'

Deanne Jade, psychologist and founder of the National Centre for Eating Disorders

'a compelling account of anorexia which in deceptively simple style, really gets under the skin of why people starve themselves. Woolf, the great-niece of Virginia, has already charted her progress in a weekly column for the Times which received a huge response from fellow sufferers and their loved ones.'

'The contrast between her privileged life and her personal misery is strikingly established in this book before she begins to deal positively with her long-standing 'addiction to hunger'… 'Coming out' about her condition and narrating the process of recovery has been as much agony as therapy, but it has been a needful exercise for the writer and her support group of readers.'

'The title of her book is laced with irony: an apple a day does not keep the doctor away if that is all you are eating... her words are neatly woven, not sentimental - the account of the life and love of a thirty-something woamn... It could be any of us. Some of the most interesting passages are about how she 'outed' herself, first to her boyfriend, Tom, and later to readers of The Times, in a popular column which continues each Tuesday... Just a few weeks ago she ate her first chocolate bar in 15 years.'

'Having gone through both the disease and the recovery at one time myself, I share her conviction that we need more understanding of this complicated condition. Stories of survival from those who have suffered with the illness need to be brought forward if we are to one day unlock this chamber of secrets.'

'… Giving a clear insight into the feelings that underpin this complex disorder, Emma also shines a light on addiction generally; the self-destructive and self-sabotaging tendencies that go hand in hand with poor self-worth and skewed perspective… Eloquent, profoundly moving, romantic and, at times, shockingly candid, Emma's fearless and honest account is ultimately one of hope.'

'So much more than a memoir… told through touching prose about her relationships and career. It's such a compelling read, you may well be glued to the book until the final page.'

'If you read one thing this year, make it An Apple a Day.'

'In this heartfelt look at the causes of her eating disorder, Woolf emphatically states that her anorexia was not the result of striving to look good based on unrealistic media images but rather a mental illness based on her need for control… As Woolf walked through her personal process of self-discovery and change in her newspaper columns, she touched a chord with fellow sufferers, their families and their therapists, whose responses she includes. Her perceptive and articulate account is frank about the mental torment she endured without being morose. Insightful and informative, with fresh insights into the nature of eating disorders.'

‘It helped me though my experience of filming To The Bone…. It gave me the guidance to tell my story'

'In An Apple a Day Emma comes across as brave, real and determined. I'm sure that in sharing her story many others will be encouraged to speak out from the stigma of this horrible illness and realise that there is a life worth living beyond calorie counts and scales. It is a battle worth fighting.'

'There is one non-fiction book which I can honestly say went some way towards saving my life… I offer up almost daily, silent, thanks to Emma Woolf for being brave enough to tell her story which made me brave enough to face up to mine.'