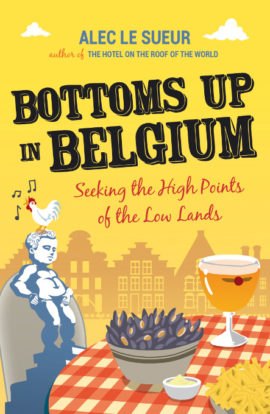 Bottoms up in Belgium

Seeking the High Points of the Low Lands

‘Brussels and all those Eurocrats on the gravy train? It’s just so boring. Why, you can’t even name ten famous Belgians!’

Until 1993, Alec had never been to Belgium, so it came as some surprise when in August that year he found himself at the altar of a small church in Flanders, reciting wedding vows in Flemish. It was the start, for better or for worse, of a long relationship with this unassuming and much maligned little country.

As he ordered yet another pint of Stella, it dawned on him that perhaps it was time to immerse himself in Belgian culture, especially when there were over a hundred locally produced beers on the menu. He vowed to put worldwide opinion to the test: just how boring can Belgium be?

Alec Le Sueur started a promising career in luxury hotels, with positions in London, St Tropez and Paris, until one fateful day he took the unusual career choice of leaving Europe to join the management team of the infamous Holiday Inn Lhasa. He spent five years in Tibet, the subject of his first book, The Hotel on the Roof of the World, before returning to his native island of Jersey. A further career change led Alec to swap VIP guests for lawyers and to acquire an MBA in law firm management. He gives frequent talks on his time in Tibet and is a regular contributor to Food & Wine magazine. He also writes articles on management and strategy for exciting law journals