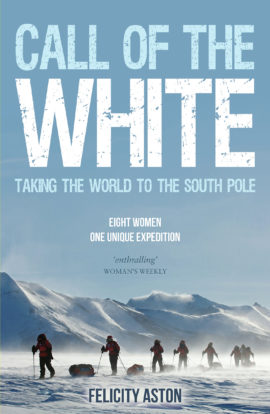 Call of the White

Taking the World to the South Pole

Could you ski to the South Pole? That was the challenge that British Adventurer, Felicity Aston put to women from around the Commonwealth as she set out to create the most international all-female expedition ever to the South Pole. The team would not be experienced explorers but ‘ordinary’ women who wanted inspire others to follow their dreams or make a change for the better in their lives. She received more than 800 applications and embarked on a three-month journey around the world to interview candidates. ‘What is skiing?’ was the question that greeted her in Ghana.

At the close of 2009, Felicity led a team from places as diverse as Jamaica, India, Singapore and Cyprus – some of whom had never even seen snow or spent the night in a tent before joining the expedition – on a 900 km skiing trek across the Antarctic, one of the toughest and most notoriously hazardous journeys on the planet.

Eighty-mile-an-hour winds ripped through base camp; frostbite and injuries were an everyday occurrence; deadly crevasses emerged from the cracking ice beneath their feet. But they also shared beliefs, ideas, philosophies and laughter, made lasting memories and broke no less than six World Records.

Felicity Aston has spent over a decade travelling, working and living all over the Polar Regions. In 2009 she led the most international team of women ever to ski to the South Pole; this became the subject of her first book, Call of the White, a finalist in the Banff Mountain Book Competition in 2011. Outside Magazine, the leading adventure-travel magazine in the US, named her one of their 2012 Adventurers of the Year.

'… author Felicity Aston describes how she led an expedition of "ordinary women" from all over the world - including some who had never seen snow - on one of the world's toughest journeys, skiing to the South Pole. The results: frostbite, injuries, hardships - and also newfound persistence, strength, and friendship.'