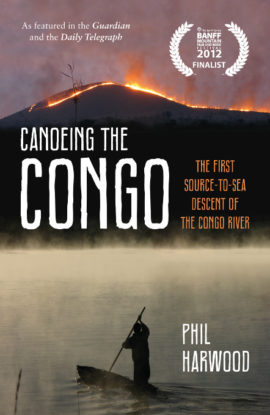 The First Source-to-Sea Descent of the Congo River

At 2,922 miles, the Congo is the eighth longest river and the deepest in the world, with a flow rate second only to the Amazon. Ex-Marine Phil Harwood embarked on an epic solo journey from the river’s true source in the highlands of Zambia through war-torn Central Africa. With no outside help whatsoever he faced swamps, waterfalls, man-eating crocodiles, hippos, aggressive snakes and spiders’ webs the size of houses. He collapsed from malaria, and was arrested, intimidated and chased. On one stretch, known as ‘The Abattoir’ for its history of cannibalism and reputation for criminal activity, the four brothers he hired as bodyguards were asked by locals, ‘Why haven’t you cut his throat yet?’ But he also received tremendous hospitality from proud and brave people long forgotten by the Western world, especially friendly riverside fishermen who helped wherever they could on Phil’s exhilarating and terrifying five-month journey.

Author’s documentary film of the journey, available on his website ww.canoeingthecongo.com, won several awards and went on tour in North America with the Vancouver International Mountain Film Festival.

'Harwood's epic tale of his solo journey from the Congo's source in Zambia through war-torn Central Africa.'

'Harwood's book is proof that the path less travelled is still out there for those brave enough to seek it out.'

'Succumbing to malaria, arrested, chased and harassed, he nevertheless emerges triumphantly alive, ready to entertain those of us who would rather read about than canoe the Congo.'