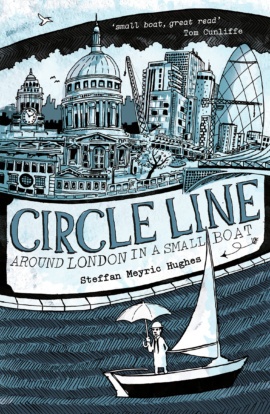 Around London in a Small Boat

Magic, to a sailor, is harnessing the wind – getting something for nothing – the surprise of a gust, the boon of a side-wind and the trial of a headwind and best of all, the moment when a change in direction means turning away from the head seas and wind and spray in silence and warmth. In 1969, man flew to the moon and sailed around the world solo. In 2009, sailor and Londoner Steffan Meyric Hughes thought he’d try something a little closer to home, becoming the first to sail and row around London in a small boat. Along the way, he discovers the history of the great city and great secrets of the mysterious Thames: wrecks, bombs and intrigue. Circle Line is the story of a unique journey on the forgotten waterways of one of the world’s greatest capitals; an investigation into the way we live today; and a humorous, moving trip down memory lane.

'There is a great deal to like and though the book takes place over just a ten day trip the sense of adventure and discovery is significant… On the one hand it is a look at a slower pace of life brought about by pottering somewhere in a boat. On the other it is an exploration of our capital city as very few have seen it. Happily it works both ways… '

'This book tells the unique journey on the forgotten waters of the Big Smoke and there is lots of humour thrown in too.'

The Clitheroe Advertiser and Time

'… a slow, watery journey through a London of urban canals, dark tunnels and turning tides. His journey is an exploration of a London brim full of secret histories and intimate details, revealed as he grapples with oar, sail, belligerent outboard motor and flimsy tent. Through vignettes and philosophical musings, insights and observations Meyrick Hughes offers an informed and honest account… By turns funny and poignant… well researched and well written account of his journey along the Grand Union and Thames. It's a story that combines anecdote, autobiography, wryly humorous reflection on a city, and an obvious passion for all things boatesque in a way that manages to be both knowledgeable and inclusive. Circle Line is an often revealing insight into the roots of one man's passion for the water way, and into one of the great cities of the world as seen from its water-logged underbelly… a delightful book, and one I'd recommend… a well written exploration of how a lifelong love of the water road evolves.'

'Londoner Steffan Meyric hughes wanted an adventure and so he embarked on becoming the first person to sail and row around the city in a small boat. Along the way he discovered the truth about boats, the sea and river and unravelled the history of London and the fascinating secrets about the mysterious River Thames… a unique journey… lots of humour… '

'The news editor of Classic Boat magazine sails and rows around London in a small boat, both along the Thames and down some of the capital's lesser known waterways. His account of the voyage is both charming and revealing.'

'A fascinating tale of the mysteries of the Thames and London's forgotten waterways, unknown to so many.'

'Steffan Meyric Hughes, a boating journalist, takes us on a looping clockwise tour … in his tiny dinghy, with autobiographical side trips and historical digressions. It works very well. The mixture of cartoony mishaps, encounters with eccentric waterborne humans (and the odd angry swan), historical trivia and seafaring adventure stops the book from languishing in the doldrums. The unusual perspective on the London that we take for granted launches Hughes into romantic rhapsodies on the transcendental, elemental experience of sailing. The result is an intriguing and lively read.'

'Fascinating facts and little knows snippets about the Thames and the surrounding city. Charming - and made more so by Rob Smith's fantastic cover illustration, featuring some rather lovely line illustrations of London, and a dapper depiction of the author in, well… A small boat!'

'Circle Line is the story of a unique journey on the forgotten waterways of one of the world's greatest capitals; an investigation into the way we live today; and a humorous, moving trip down memory lane.'

'Full of detail, this book reveals little-known secrets that will delight readers.'

'Few people today sail on the Thames, but Hughes demonstrates that it is eminently possible and may even be the ideal 'staycation'.'

'Having sailed since he was ten, Hughes knows a thing or two about boats. … In this, his first book, Hughes reports on his ten day trip at slower than walking pace, on canals and through tunnels, before making the return along the River Thames … his 70 mile journey must surely make a refreshing change from being penned in on the Tube?'

'… a jolly good and often perceptive read that will be of particular interest to those who think they already know the capital's waterways, or have perhaps come across them for the first time, through the Olympics or Jubilee celebrations.'

"… a voyage around London, starting and finishing at Kingston-upon-Thames. He travels via river, creek and canal to locations such as Wembley and Islington, giving us an inside look at the hidden side of London, with wry descriptions that make this a fun read."

'Steffan's book Circle Line chronicles his fascinating journey around London. Not by the yellow tube line, but using the network if rivers and canals surrounding the capital… a fascinating read.'

'… a unique challenge… It's ostensibly a tale of minor scrapes, buggered locks and awkward moorings. But this is not the London travelogue you might expect from the title… the unusual mission is used as a background device for telling tales and sharing an enthusiasm for life on the water. It's mostly a pleasant read, of boating bonhomie and the slower pace of life upon the water, but not always so. Frequent paddles into darker territory (such as the fate of the Marchioness, and the launch of the Albion) make for a varied read. Yet even the most ardent of landlubbers will be charmed by this alternative way of life and method of exploring London.'

'… our capital from an angle few now see… We are treated to his insightful comments on the old and new architecture, particularly how the waterfront has changed and even the quality of the water itself… In the tradition of good travel writing, this is a good 'sailing book.'

'Uncovering the history of the Thames and boats themselves, Hughes also discovers the feeling of loneliness that travelling this way can bring. Full of detail, this book reveals little known secrets that will delight readers.'