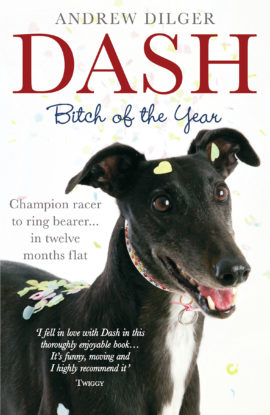 Bitch of the Year

It was two in the morning. We dragged ourselves out of bed and went downstairs again. The conservatory was devastated. Anything free-standing had been pulled over; anything wooden had been attacked. There, in the middle of the scene, the queen of chaos herself was standing on top of the table with rolling eyes and a tongue twice its normal length.

Andrew had always wanted a dog – something you could mould into the perfect playmate. Tail going like a windscreen wiper, tongue a pink strip, wet-nosed, bright-eyed – what boy wouldn’t want such a force in his life?

But a man of thirty-seven? And an ex-racing greyhound?

Dash is a heart-warming memoir about the adoption of a champion greyhound bitch and her transformation into ring-bearer at her new owner’s wedding. Set over a watershed twelve months, it’s the story of wanting the perfect dog and planning the perfect wedding. ‘Dash’ is far from perfect, but that’s half the fun. The novelty of a man trying to organise a wedding is the other half.

'a charming tale of one man's love for his greyhound and how that relationship… helped him to commit to his girlfriend.'

'A heart-warming memoir… describes how his adoption of a champion greyhound bitch, Dash, changed his life... romantic and humorous.'

'… easy to pick up, hard to put down… Greyhound lovers will recognize the comical occurrences… entertaining… It's an emotional finale that puts Dash and her newlyweds on the edge of a new stage. One hopes for a sequel.'