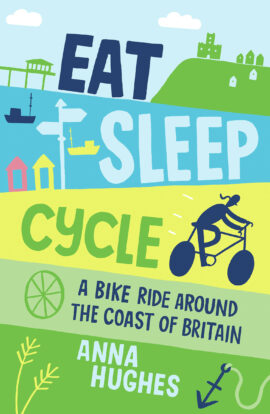 A Bike Ride Around the Coast of Britain

For Anna, a cycling enthusiast, the decision to ride 4,000 miles solo around the coast of the UK wasn’t that hard. Following the river from London until it became the sea, then following the sea until it reached the mouth of the Thames again was a beautifully simple idea. But after epic highs, incredible lows, unforgettable scenery and unpronounceable place names – as well as a hearty battle with some good old British weather – her simple idea turns into a compelling journey of self-discovery, and an eye-opening insight into what makes the island where she lives so special.

Anna Hughes is a freelance writer, cycling instructor and mechanic. A passionate cycling tourist and traveller, her various adventures have taken her around the coast of the UK by bike and by boat, along the spine of Britain from Land’s End to John o’Groats, and through the rigours of an Ironman. She lives on a narrowboat on the River Lea in east London.

'beautiful descriptions of the British coastline from Cornwall right up to the Highlands, a book for cyclists and armchair travellers alike.'

‘colorful characters are met along the way, and her doggedness in carrying on, when she admits to herself (in Wales) that she doesn't want to do it anymore, is impressive and potentially inspiring’

‘most enjoyable… the book would appeal equally to a non-cyclist’

“Anna has a beautiful way with words that lifts her adventure story out of the ordinary and into the sublime. Her lyrical descriptions had me itching to saddle up and explore beautiful Britain for myself.”