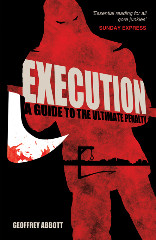 A guide to the Ultimate Penalty

Execution is a gruesomely fascinating account of methods of judicial execution from around the world and through the ages, and includes such hair-raising categories as death by cannibalism, being sewn into an animal’s belly and a thousand cuts. In his own darkly humorous style, Geoffrey Abbott describes the instruments used and their effectiveness, and reveals the macabre origins of familiar phrases such as ‘gone west’ or ‘drawn a blank’, as well as the jargon of the underworld.

From the preparation of the victim to the disposal of the body, Execution answers all the questions you are ever likely to ask, and some you would never want to imagine.

'A valuable and first-class book.'

John J. Eddleston, author of The Encyclopaedia of Executions

'This is quite extraordinary… A gory little book that I am sure will fascinate many. Dip in and you become hooked. Great impulse buy.'