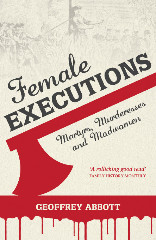 The fairer sex get it in the neck in these grisly tales from the gallows, guillotine and gas chamber. You have been warned.

From Nan Hereford, the cloaked highwayman who held up coaches with just her fists, to the woman who survived the gallows and took her empty coffin away with her, Female Executions illuminates history’s darker periods with a detailed and factual approach. Grimly funny and darkly gripping, interspersed with unusual last requests and black and white illustrations throughout, this is history at its most morbidly fascinating.

‘Abbott has a fine sense of gallows humor’