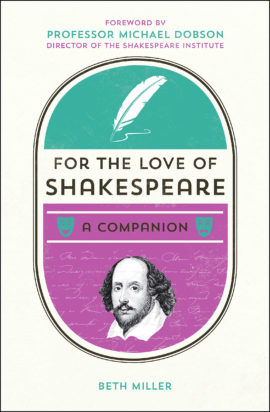 For the Love of Shakespeare

For further fascinating insights, dive into this masterful miscellany and become a Shakespeare buff.

There’s never been a better time to take a fresh look at William Shakespeare’s eternal works. A treasure trove of wit, imagination and emotion, his plays and poems continue to surprise, inspire, console and delight us. Whether you’re a lifelong lover of the Bard or a curious newcomer to his world, this companion will lift the curtain on the unforgettable characters and stories of Britain’s greatest dramatist.

Beth Miller’s varied career has included roles as a sexual health trainer, journalist, psychology lecturer, PhD student and inept audio-typist. She is the author of two novels, When We Were Sisters and The Good Neighbour, as well as For the Love of the Archers. You can find out more about Beth and her work at bethmiller.co.uk.

‘Well informed, wide-ranging, undogmatic and reader-friendly, this agreeably written book offers a highly accessible and enticing guide to Shakespeare's life, his writings, and his impact, which will give pleasure to those who already enjoy the plays and poems and may well help others to see what they are missing.’