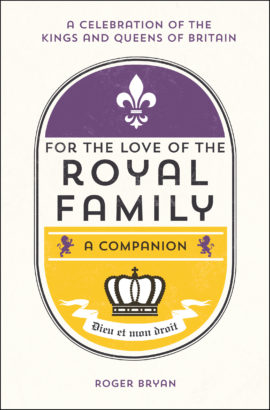 For the Love of the Royal Family

This rich miscellany celebrates the fascinating history of the British Royal Family, from the reign of Egbert, King of Wessex, to the monarchy of the present day. Full of titillating trivia, little-known facts, bite-size biographies and memorable quotations, it paints a colourful picture of how the kings and queens of this noble land have shaped the way we live today.

Roger Bryan was born in Lancashire. After university in Wales, he started as a cub reporter on the Hemsworth and South Elmsall Express and, over the course of his career in journalism, became chief sub editor at The Mail on Sunday, where he worked for 20 years.

He has written a number of highly acclaimed local histories and also a quirky and personal collection of mnemonics entitled It’ll Come in Useful One Day: Intriguing Ways To Jog Your Memory.

'This history of the British Royal Family is a trivia-fan’s dream.'