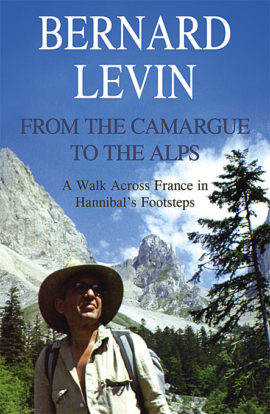 From the Camargue to the Alps

A Walk Across France in Hannibal's Footsteps

With passion and wit, Bernard Levin describes his travels on foot through the beautiful countryside of south-eastern France. He follows in the mighty footsteps of the great Carthaginian enemy of Rome, Hannibal, who made the expedition with an army and elephants nearly two millennia before.

From the Camargue via the Rhône Valley, across the Alps and into Italy during August snowstorms, he comments on the social and historical importance of the landscapes he passes through, taking detours to the table of chef Jacques Pic at Valence and the Arles region immortalised by Van Gogh. The journey would not have been complete without enjoying the hospitality of the Moussets – the fifth generation of their family to produce wine at Châteauneuf-du-Pape, before turning eastwards, to face the greater challenge of the Alps.

Bernard Levin (1928-2004), the 'most famous journalist of his day' (The Times), made this journey in the 1980s. He was awarded a CBE for his services to journalism in 1990 and is the author of the best-selling titles Enthusiasms and Conducted Tours.