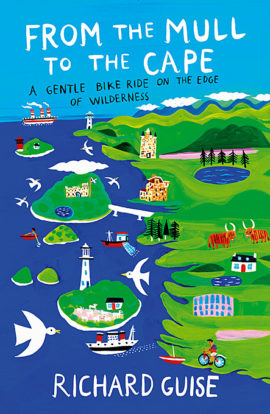 From the Mull to the Cape

A Gentle Bike Ride on the Edge of Wilderness

The lochside stretch I was rolling through formed the trickily named Achaglachgach Forest, where I panted up and down Glen Achaglachgach, past Achaglachgach House and through Achaglachgach village, which was totally deserted. Maybe they’d all choked to death trying to say ‘Achaglachgach’.

Richard Guise yearned to take on a physical challenge before he reached the age where walking across the kitchen would fall into that category. And so he donned a cagoule, packed his saddlebags and set off for an adventure on a bike named Tetley. This is the tale of his 586-mile, 16-day ride through the Highlands of Scotland, along the dramatically beautiful west coast from the Mull of Kintyre in the south to Cape Wrath in the north.

Freewheeling along isolated roads where traffic problems consist of the occasional retreating sheep and stopping for lunch on deserted beaches, he has time to ponder the Laws of Cycle Touring and take in spectacular sights, from craggy, cloud-shrouded mountain ranges to lochside forests.

Guise discovers the little-known history of this unique part of Britain. He is the classic observant outsider, picking up on the oddities and strange beauty of the place and telling it all with gentle humour – even amid severe bouts of traditional Highland weather.

Richard Guise is baed in Quorn, Leicestershire, and spends part of the year in Girona, Spain.