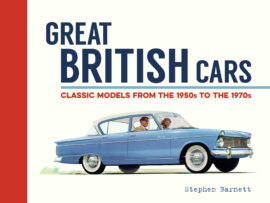 Great British Cars celebrates the cars commonly seen on the nation’s roads during a golden age of motoring. From the 1950s to the 1970s, Britons drove such models as the Ford Zephyr, Hillman Imp, Triumph Herald, Ford Capri, Vauxhall Viva and, of course, the Morris Minor 1000. While rarely seen now on our roads, the 40 models described here still have a special place in many drivers’ hearts. Join Stephen Barnett on a nostalgic road trip back in time, in this beautifully illustrated celebration of classic cars.

Stephen Barnett is a journalist and writer, the author of more than 30 books mainly on natural history, social history and popular culture. The British countryside, he believes, comprises a unique habitat and way of life that deserves the greatest protection we can give it. He divides his time between New Zealand and the UK.