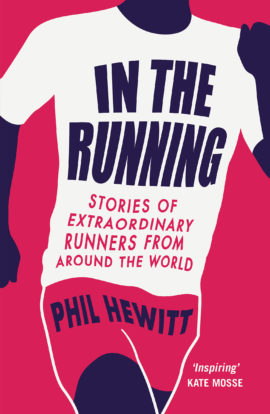 Stories of Extraordinary Runners from Around the World

Running isn’t a hobby, it’s a way of life.

Runners run to be the best they can be, to challenge who they are, to inspire others and to champion their cause.

From the woman who ran for three and a half days without sleep, to the 61-year-old man who broke records in an 875-km ultramarathon, this collection of unforgettable stories will inspire anyone who’s ever pounded the pavement to keep on running and enjoy every minute of this liberating sport.

Phil Hewitt is group arts editor for Sussex Group Newspapers. His books include Chichester Remembered, Chichester: Then and Now, Gosport: Then and Now and Keep on Running: The Highs and Lows of a Marathon Addict (ISBN: 978 1 84953 236 5).

‘A highly inspirational and touching legacy to the many long distance runners who have achieved great triumphs against the odds. A gem for the running community at large - of which I belong.’

A passion for running and runners shines through this book, a timely reminder that at its essence it is the purest, most simple of sports. Through its legion of subjects, all hugely accomplished in their different ways, Phil Hewitt engagingly captures running's soul.

‘An eclectic runnerpedia of astounding facts and inspirational stories, Hewitt's book reveals characters prepared to do just that little bit more to reach their chosen running goal. Sourced from a vast array of running lore, even the most seasoned reader will find something new and wondrous here. I read it from cover to cover, but you could just as easily dip in whenever you want. Enjoy.’

'What a marvellous idea for a book about the most fascinating characters in the history of distance running! No one is better fitted to tell their stories than Phil Hewitt, a brilliant wordsmith devoted to the sport.'

‘A fascinating look at the limits of human endurance - informative, inspiring but above all entertaining.’

‘An inspiring celebration of the milestones and motivation of running’s greatest stars, In The Running also lauds the everyday heroes at the back of the pack. Encyclopaedic and engaging, you’ll delight in its many tales of courage, camaraderie and sheer craziness.’

Lisa Jackson, author of Your Pace or Mine?

‘For women, it's not just about running. It's about changing their lives. Phil Hewitt captures this in his compelling narrative of these astonishing women who have created this sport.’

Kathrine Switzer, first woman to officially run the Boston Marathon, winner of the 1974 New York marathon, and leader of the 261 Fearless Movement