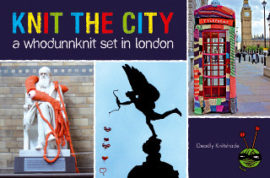 A Whodunnknit Set in London

Since 2009, Deadly Knitshade and her covert group of dyed-in-the-wool knitting ninjas have been transforming the grey streets of London in a riot of woolly colour – one stitch at a time. No corner is safe from their yarnstorms – sublime crafty marriages of street art and knitting – which have baffled policemen, delighted tourists, and brought a touch of much-needed homespun colour into the everyday lives of Londoners. Knit the City’s handmade mischief transformed a forlorn ballerina outside the Royal Opera House, cosied a Parliament Square phone box and conjured a 13-ft spider’s web, replete with doomed insects and fairies, in a tunnel beneath Waterloo station. Their daring arty feats will ensure that you never see knitting – or London – the same way again.

'It is a book led by photos and would make a great talking point for a coffee table book. I read it all in one sitting but I'm not putting it on the shelf yet as I want others to enjoy it too.'