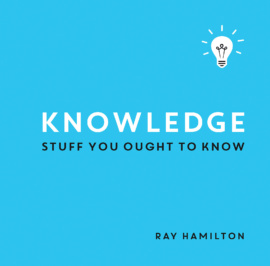 Stuff You Ought to Know

You can never know too much stuff. For example:

This outrageously informative book is packed full of fascinating nuggets of history, science, literature, technology, sports, geography, culture and miscellanea from every corner of the world – enough mind-blowing trivia to ensure you’re never short of a jaw-dropping conversation starter (or stopper) again.

Ray Hamilton is a freelance writer and editor, whose lifelong passions are travel, languages and history. He has edited books on a wide range of subjects, including politics, history, travel, sport, gangland violence and birdwatching! He previously pursued a varied career in government, the highlights of which included multilateral government negotiations in Paris and forays into sub-Saharan Africa.