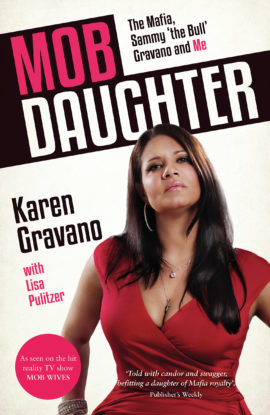 The Mafia, Sammy 'The Bull' Gravano and Me!

It wasn’t until I was twelve years old that I knew for certain that my father was a gangster. Even then, I knew not to ask any questions.

Karen Gravano is the daughter of Sammy ‘the Bull’ Gravano, one of the Mafia’s most feared hitmen. With nineteen confessed murders, the former Gambino Family underboss was John Gotti’s right-hand man, and the highest-ranking gangster ever to testify against members of his high-profile crime family.

To Karen, though, Sammy Gravano was a sometimes elusive but always loving father figure – he was ever-present at the head of the dinner table and made a living running a construction firm and several nightclubs. But by the age of twelve, Karen knew he was a gangster, and as she grew up, while her peers worried about clothes and schoolwork, she was coming face-to-face with crime and murder. She was nineteen when her father turned his back on the Mafia and cooperated with the Feds, which left her family broken and living in fear of retaliation – this is the compelling true account of her life as a Mob daughter.

'fans of Mafia films and TV shows will hugely enjoy seeing how perfectly the reality seems to match the fiction.'