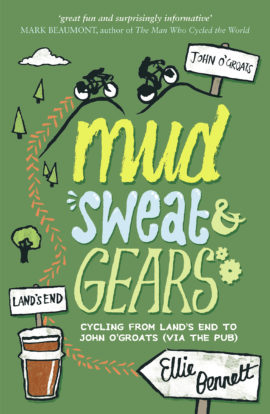 Cycling from Land's End to John O'Groats (Via the Pub)

As Ellie’s fiftieth birthday approaches and her ambitions of a steady income, a successful career and an ascent of Everest seem as far away as ever, she begins to doubt she’s capable of achieving anything at all. So when her best friend Mick suggests a gruelling cycle ride from Land’s End to John o’Groats, she takes up the challenge. They opt for the scenic route which takes them along cycle paths, towpaths and the back roads and byways of Britain, unable to resist sampling local beers in the pubs they pass along the way. But as the pints start to stack up faster than the miles they’re putting under their tyres, Ellie wonders if they’ll ever make it to the finishing line…

Mark Beaumont, author of The Man Who Cycled the World

'Ellie Bennett takes on the End-to-End with plentiful supplies of humour and beer.'

'Ellie Bennett is funny, she can talk the rear wheel off a Dawes three-speed and she loves a decent pint. I'd tag along with her any day'

'Likeable account of a journey by bike from Land's End to John-o'-Groat's via plenty of pubs.'

'What a great laugh out loud read this book is!! It will cheer up even the dullest of days… A terrific read for any cycle fan!!'

'Well worth a read for travel and bike enthusiasts'

'This enjoyable account of their End-to-End route, split by days, and a 'stats' list stating miles cycled and pints of beer consumed - one wonders how they'll make it to their destination at all. Definitely a fun read for anyone who believes cycling is a very nice way to complete a sightseeing (and eating) adventure rather than a race against the clock'