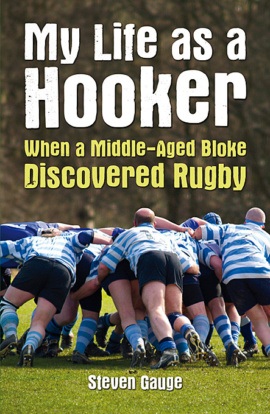 My Life as a Hooker

When a Middle-Aged Bloke Discovered Rugby

In my late thirties, it gradually dawned on me that I had become Jason’s regular hooker. It was an arrangement that worked well for a couple of reasons. He didn’t need me to dress up in anything particularly risqué or to do anything too vulgar, other than cuddle in the middle of a field with him and fourteen other men on a Saturday afternoon.

Steven Gauge’s response to an impending midlife crisis didn’t involve piercings, tattoos or a red sports car – instead, he decided to take up rugby. What he found on the pitch was a wonderful game, far removed from the professional televised glamour of international rugby, where ordinary blokes with ordinary jobs (and some extraordinary bellies) get together once in a while and have a great time rolling around in the mud.

By the end of his first few seasons, Steven had cracked his nose and various other parts of his anatomy – but he had cracked the game too, and found a place in the club as Captain of the Fourths.

Steven Gauge was introduced to rugby at school, but failed to break out of the 4th XV. He returned to the game aged 35, writing about the experience in My Life as a Hooker, which was shortlisted for the British Sports Book Awards. He still plays occasionally for Warlingham Rugby Club, in Surrey, when they are short of a front row.

'On an Iron John odyssey in search of his own Iron Johnny Wilkinson, Steven Gauge reveals the hidden depths of commuterland manhood with charm, wit and intelligence and real insight. Whether you're going through a midlife crisis yourself, or seeking understanding of the delicate male psyche and its need to bond in mud, My Life as a Hooker is the only guide you need.'

'Steven Gauge's writing debut is far more accomplished than his hilarious efforts on the pitch. Painfully honest and self-deprecating, this story will appeal to anyone who's ever tried their hand at something they weren't terribly good at but still enjoyed every step of the way. The characters in the clubhouse are the stars of every amateur team up and down the country and will be familiar to anyone who has ever put on a club shirt. You want to join the team as much as turn the page. If this is what a midlife crisis does for you, I want one.'

Sports Book of the Month

'thankfully, Gauge has submitted [sic] his midlife experiences to paper and come up with an entertaining meander through rugby clubs, drinking and, of course, rugby tours.'

'engaging tale… a breezy, often witty account of one man's desire to do something different and reject the notion that, just because you're getting on a bit, it doesn't mean you're quite ready for a Zimmer frame.'

'an open account of one man's mid-life crisis and also a second chance at sport... A heart-warming read with just the right amount of educated cynicism.'

'contains lessons that reach beyond the gates of Warlingham Rugby Club car park… Its underlying philosophy [is] of self-help, communal activity, tolerance, respect and beer… Well-written, funny and warm hearted. It opens with a great joke and builds seamlessly from there… Steven builds an entire philosophy of life into his 230 page narrative.'

'a ruck-load of laughs… one of those rarities in sports publishing: a humorous book which is genuinely funny… [Gauge] is able to recount in full, life in the casual nether reaches of British sport… made me laugh out loud.'

'a sports book that celebrates an unfit 40something novice player in the third worse team in Surrey… autobiographical traipse through a rough and tumble approach to a mid-life crisis.'

' funny yet so true'

'hilarious take on a season with Warlingham 4ths. Warm and witty'