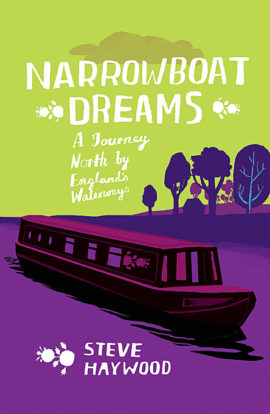 A Journey North by England’s Waterways

Steve Haywood has a problem. He doesn’t know where he comes from. In the south, people think he’s a northerner; in the north, they think he’s from the south. Judged against global warming and the sad demise of Celebrity Big Brother, this hardly registers highly on the Richter scale of world disasters. But it’s enough to worry Steve. And it’s enough of an excuse for him to escape the routine of his life in London for a voyage of discovery along England’s inland waterways.

Travelling by traditional narrowboat, he heads north from Banbury in deepest Oxfordshire, through the former industrial wastelands of the now vibrantly modern Manchester, to the trendy affluence of Hebden Bridge at the centre of West Yorkshire’s ciabatta belt. With irrepressible humour he describes the history of the canals, his encounters with characters along the way, and the magic that makes England’s waterways so appealing.

Steve Haywood is an award-winning TV producer and has worked on programmes such as Newsnight, Panorama and Rough Justice. Based in London, he writes a lively, provocative column for Canal Boat magazine.