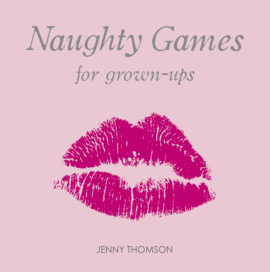 If you thought that fruit was just for eating, Snakes & Ladders couldn’t be sexy if it tried, and that raffles belonged at fairs, then you’re in for a surprise. Suddenly all of those things got sexy. Read Naughty Game for Grown-ups and you’ll find out why. Naughty Games for Grown-ups contains over 100 sexy, saucy games for grown-ups. Snap on your suspenders, whip out the ice cream, and delve into this book for some great ideas to spice up your sex life. From Randy Raffles to Blind Man in the Buff; Truth or Bare to The Great Knicker Chase, you’ll never want to play board games again.

Jennifer Thomson is a journalist and award-winning author who writes ficion under the name Jenny Thomson. She has written for many of the top publications in the UK. She currently lives on a Scottish island where she loves to go for walks with her rescue dog Benjy.
Her zombie novel, Dead Bastards, which is set in Glasgow was published by TWB Press in December 2012 under Jenny Thomson.
Hell To Pay (also published under Jenny Thomson), her revenge thriller, was published by Sassy Books in July 2013. The follow up, Throwaways, the second in the series of books she's dubbed 'Die Hard for Girls' will be published in 2014.
She charts the ups and downs of writing fiction at http://ramblingsofafrustratedcrimewriter.blogspot.com and tweets as @jenthom72 and @diehardforgirls.
In her time, she has worked as a mental asylum inmate (she was a TV extra, honest), a football correspondent (for 90 Minutes, Scottish Football Today Goal etc...), as a board game inventor and in a psychiatric hospital laundry where she used to find doctors' scalpels in the pockets of their discarded white coats (mercifully, she still has both hands).