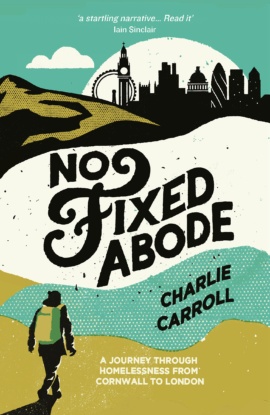 A Journey Through Homelessness from Cornwall to London

In the summer of 2011, Charlie found the school he taught at could not afford to renew his teaching contract. With no job and no money, but suddenly all the time in the world, he decided to travel from Cornwall to London in a peculiarly
old-fashioned, quintessentially English and remarkably cheap way – as a tramp, on foot, sleeping rough.

The journey was filled with colour, surprise and danger, and a range of memorable encounters – from Stan who once saved a boy from being raped but whose homelessness stemmed from a paralysing addiction, to Ian, who lived in a tent on Parliament Square. With a striking mix of travel and current affairs writing, No Fixed Abode sheds light on a side of the UK few ever see from within.

Charlie Carroll is the author of The Friendship Highway (Summersdale, 2014), No Fixed Abode (Summersdale, 2013) and On the Edge (Monday Books, 2010). He has written for The Guardian, The Big Issue and the Daily Mail, been featured in National Geographic, The Telegraph and The Times, has discussed his work on BBC Radio 5Live and various local radio stations, and has appeared at a number of literary festivals across the UK.

'Honouring the expeditions of Jack London and George Orwell into hidden zones of poverty and homelessness, Charlie Carroll contrives a startling narrative of a nightworld most of us would choose to avoid. He is perverse, obstinate, brave about his own strategic cowardice (or writerly self-preservation), He is driven and unyielding in the determination to return from darkness to light with a story worth the telling. That story grips and bites and blisters. Read it.'

'This was a fascinating concept and an immensely courageous assignment. The descriptions were powerful and evocative and throughout his journey I really did feel I was walking with him and experiencing his many feelings, including his isolation, trepidation and sense of exclusion and vulnerability. It should be required reading for all those who have difficulty in seeing behind the face of the destitute in our affluent society.'

'Charlie Carroll's unique journey from Cornwall to London provides a rare perspective on life as seen from the street; a glimpse into the fringes of society and the people who, for all manner of circumstance, inhabit a very different world. It's an honest, poignant and often courageous tale of homelessness and life on the move and raises many questions about the kind of society that we live in; about tolerance, prejudice and probably - most of all - about camaraderie and the affirming power of the human spirit.'

'Charlie's managed to poignantly capture the plight of our often forgotten homeless in a way that's sometimes scary, frequently surprising but always genuine and heartfelt. Eye opening - a true insight into a life many of us will never know.'

'Surprises, danger and some memorable characters await, along with a fresh perspective on homelessness.'

'he recounts his adventure, with experiences both good and bad, bringing new insights into some of the fellow homeless people he meets on the way.'

'This isn't a polemical book and we finished it no wiser as to what we should do with any charitable donation or urge or political lobbying. But it is a completely honest and open account of one man's brief time on London's streets, and totally absorbing.'

'an interesting read and one which I recommend to those who think the homeless are best avoided or forgotten!!'

'Carroll offers a unique insight to a lifestyle many thought died out years ago.'