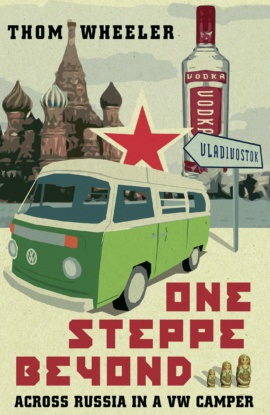 Across Russia in a VW Camper

Travelling across the former Soviet Union is a challenge at the best of times – but in a dilapidated VDub… that’s got to be plain daft… hasn’t it?

I was in my prime, hungry to make a mark on the world, yet I was making ends meet by delivering egg and cress sandwiches on a bicycle with a bent axle to condescending office workers. Gainful employment in the ex-Soviet Union was a dream come true.

A chance job offer at a timber yard in Estonia gives Thom and his old pal Jo a taste for the unknown. So when Uncle Tony asks them to drive to Vladivostok for another job, they can’t think of a good reason why not. The result is a classic caper across the former Soviet Union in Max, a rusty old VW camper. Knowing little of the language or the geography ahead, they embark on probably the longest commute ever, encountering corrupt officials, film star mechanics and over-friendly gangsters. Far off the tourist trail, they bear witness to the collapse of one nation and the birth of a new one during the free-for-all that was Russia in the nineties.

Thom Wheeler is a writer with an interest in travel and a particular interest in regions of the ex Soviet Union. He has lived for extended periods of time in Georgia, Estonia, Ukraine and Russia.
He has contributed to various publications, and appeared on BBC Radio and Talk Radio Europe. Thom is the first person to drive a campervan across the Russian Federation (from Tallinn to Vladivostok) - a journey recounted in his book One Steppe Beyond. He lives in Brighton.

'This well-written account is full of humour, character portraits and information asides.'

'Entertaining account of a drive to Vladivostok and the encounters along the way.'

'Wheeler's book is an absorbing and entertaining look at Russia's dramatic evolution in the '90s'.'

'A wonderfully quirky ride across the former Soviet Union'

'This is a book for would be road warriors and seasoned globetrotters alike. Wheeler's travelogue is informative, accessible, and more fun than a banya full of vodka swilling Dmitrys.'

'A nice balance of humour and observation, of character and political commentary, One Steppe Beyond should have no trouble finding an audience among armchair travellers.'