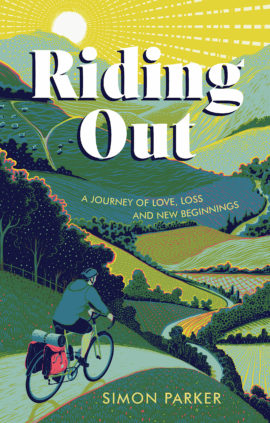 A Journey of Love, Loss and New Beginnings

“A truly inspiring journey that celebrates the healing power of adventure. A must-read.” – Levison Wood

The remarkable and inspirational true story of how one man battled grief and anxiety, one pedal stroke at a time, on a 3,500-mile adventure around Britain

In March 2020, as Britain entered its first lockdown, Simon Parker’s life fell apart; his travel journalism career vanished overnight and shortly afterwards he received the tragic news that a close friend had died. With a long-suppressed anxiety disorder starting to rear its head, he turned to the only therapies he knew and trusted: travel and exercise.

Setting off on his bike from the northernmost point of Shetland with only a sleeping bag and a camping stove, Simon would end up cycling 3,427 miles around Britain. En route, he would meet hundreds of resilient Britons, who were all, in their own way, riding out the storm just like he was. Even in his gloomiest moments he began to see that a chink of light was never too far away.

Riding Out is a story of optimism and hope, and a ground-level portrait of Britain as it transforms from a country in crisis to a nation on the mend. From Shetland to the Scillies, Dover to Durness, Simon learns that life’s sharpest corners are best navigated at the gentle pace of a bicycle.

Simon Parker is an Oxfordshire-based travel writer, newspaper columnist and broadcaster who has reported from over 100 countries. He’s sailed and cycled from China to London for the BBC, cycled the length of Scandinavia for Amazon Prime, and hiked every known route to Machu Picchu for The Telegraph.

"Simon’s cycle ride around his own country is a fine demonstration that adventure and transformation begins on your own doorstep.”

“[Riding Out is] both hugely inspirational yet still relatable… Simon’s vulnerability at times will show many readers – myself included – that they aren’t alone in feeling lost these past 18 months. How he has managed this vulnerability with humour throughout the book drew me in, as did his ability to capture the spirit of the people he met along the way. His ability to describe challenging moments with honesty makes it feel like you’re hearing an old friend regale the trip over dinner.”

“In Riding Out, Simon Parker holds a humane mirror to a fractured Britain as it adjusts to a strange, isolated new world.”

Jon Dunn, author of The Glitter in the Green

“Wonderfully relatable on so many levels. Simon’s wanderlust, mental roller coaster and reactions to a fast-changing world had me enthralled in his journey, but very much reflecting on my own over the past few years. A brilliantly crafted book which holds a mirror up to the world we live in.”

“A truly inspiring journey that celebrates the healing power of adventure. A must-read.”

"If you’ve recently bought a ‘lockdown bike’ and realise you’ve not been using it enough, this inspirational, down-to-earth and touching book may give you a few ideas."