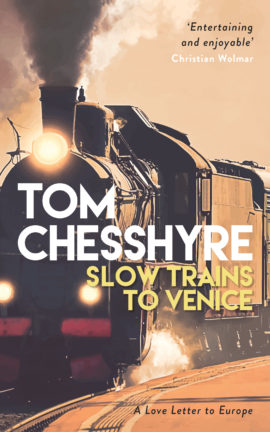 A Love Letter to Europe

Do you love trains? Do you love adventure? If so, join Tom Chesshyre on his meandering rail journey across Europe from London to Venice.

Escaping the rat race for a few happy weeks, Chesshyre indulges in the freedom of the tracks. From France (dogged by rail worker strikes), through Belgium, the Netherlands, Germany and Poland he goes, travelling as far east as Odessa by the Black Sea in Ukraine. With no set plans, simply a desire to let the trains lead the way, his trip takes him onwards via Hungary, the Balkans and Austria. Along the way he enjoys many an encounter, befriending fellow travellers as well as a conductor or two.

This is a love letter to Europe, written from the trackside.

Tom Chesshyre is the author of ten travel books. He has travelled 40,000 miles around the world for his train books; most recently for Slow Trains Around Spain: A 3,000-Mile Adventure on 52 Rides. His book writing has also taken him across North Africa after the Arab Spring, round the “dark side” of the Maldives on cargo ships and on a journey through “unsung Britain” (in To Hull and Back). He worked on travel desk of The Times for 21 years and is now freelance. His train column “Tickets, Please” appears in The Critic magazine. He lives in London.

'He casually, and beautifully, bats away the earnestness of travel literature'

'There is something nostalgic about the clatter of wheels and sleeper trains... by the end, the reader will struggle to resist the urge to follow his lead.'

'Bristling with vitality, Chesshyre’s new tome is a joyfully rudderless romp through Europe’s railway system… It’s a work of brilliant geekery, but for the most part it’s a love letter to the continent, a Eurocentric work for our Brexit-beleaguered times'

‘Like the trains he travels on, Tom Chesshyre meanders through Europe and the result is entertaining and enjoyable.’

Christian Wolmar, author of Blood, Iron and Gold: How the Railways Transformed the World

‘At a time when European unity is fraying at an alarming rate, here comes Tom Chesshyre’s travelogue to remind us of the virtues of connectedness. Better still, his explorations are made by train, and use the Continent’s historic, unpredictable routes from the era before high-speed rail. A diverting and thought-provoking read.’

Simon Bradley, author of The Railways

‘Far from being just another train travelogue, Slow Trains to Venice combines reports from a Europe on the brink of major change with amusing vignettes… An essential read.’

Anthony Lambert, author of Lost Railway Journeys from Around the

‘Beethoven with attitude, masochism in Lviv, the smell of cigarettes in the corridor, adventurous great aunts who travelled on the roofs of crowded trains, Carniolan pork-garlic sausage, Jimi Hendrix in the Slovene Ethnographic Museum and, of course, the 13:49 from Wrocław. Tom Chesshyre pays homage to a Europe that we are leaving behind and perhaps never understood. Che bella corsa! He is the master of slow locomotion.’

‘Meander through Europe in the excellent company of Tom Chesshyre, who relishes the joys of slow travel and seizes every opportunity that a journey presents: drifting as a flâneur in Lille, following in the tracks of James Joyce in a literary exploration of Ljubljana, cosseted in luxury on a trans-Ukrainian express, all decorated with a wealth of detail and intrigue.

As Tom discovers, it’s not just Brexit Britain – the whole Continent is in disarray. But at least Europe’s railways still bind us together.’

‘One of the most engaging and enterprising of today’s travel writers, Chesshyre has an eye ever-alert for telling detail and balances the romance of train travel with its sometimes-challenging realities… but for all its good humour, the book impresses as a poignant elegy for the Europe which Britain once embraced’