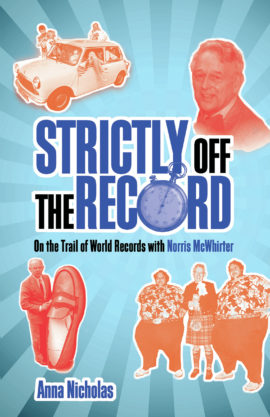 Strictly Off the Record

On the Trail of World Records with Norris McWhirter

In this achingly funny and irreverent memoir, Anna Nicholas recounts her adventures judging records around the world with The Guinness Book of Records founder, Norris McWhirter, CBE. Nicknamed Batman and Robin, they travelled the UK and beyond together meeting eccentric, weird and wonderful record breakers.

Adjudicating Richard Branson’s circumnavigation of the globe in a hot air balloon, the world’s highest tower of bread, the longest conga line and the cramming of the most people ever on deckchairs onto Weymouth beach was all in a day’s work for this dynamic duo. And, of course, things didn’t always go exactly according to plan…

Anna Nicholas has contributed to titles including the Financial Times, The Daily Telegraph, The Daily Telegraph Expat, The Independent and Express. She is a fellow of the Royal Geographical Society and once organised an expedition with explorer Colonel John Blashford-Snell to carry a grand piano to a remote Amerindian tribe.

Anna Nicholas is a freelance journalist and PR Consultant. She has run five
full marathons in different countries in the last five years and is a Fellow of
the Royal Geographical Society and a member of Women in Journalism. She
has been an international invigilator for the Guinness Book of Records and
organised an expedition to carry a piano to a remote Amerindian tribe in
South America, which was the subject of a BBC TV documentary.