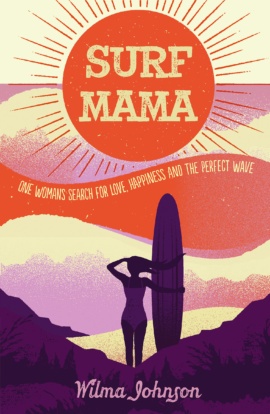 One Woman's Search for Love, Happiness and the Perfect Wave

Wilma Johnson was living on the west coast of Ireland with her family, balancing the challenges of being an artist, wife and mother, until, in her forties, she was gripped by a deep desire to seize the day, and moved to Biarritz to become a surfer.

The plan hits troubled waters as she arrives in France with her marriage on the rocks and three children who speak no French. Her first attempts at surfing are disastrous; resulting in bruises, broken bones and a damaged ego, but when she experiences the euphoric feeling of catching her first wave and sets up the Mamas Surf Club, it’s all worth it.

Wilma Johnson is an artist and writer born in London in 1960.

She has a degree in Fine Art from St Martin's College of Art.

During the 1980s she found inspiration for her paintings while

hitch-hiking round Iceland and Lapland, Italy and the Scottish

Highlands. In 1987 she spent a year travelling round Mexico

and Guatemala, following the fiesta and painting in rundown

in Ireland, where she lived for ten years, before moving to

Biarritz in 2001 to become a surfer. She has three children and

way too many animals.

'this inspirational personal tale shows that it’s never too late to change direction.'

'Johnson is one of us. You are rooting for her from the start and we defy anyone to read this book and not want to grab a surf board (or a body board, at least) and hit the waves. Let’s go surfin’!'

'This story of one woman’s foray into the macho world of surfing shows how self-reinvention is possible at any age.'

'a light-hearted read for women looking for inspiration to change their path.'

'There’s a voracious love of life at the heart of this book and a hedonistic determination to have it all – beer, wine and waves.'