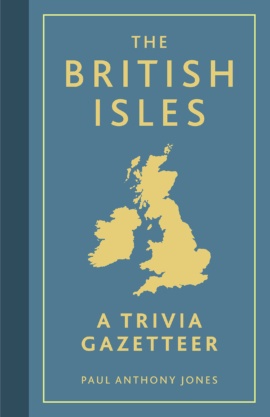 …that the oldest tree in Wales is a yew in Llangernyw in Conwy, thought to be around 4,000 years old?

… that London is one of only three cities worldwide to have hosted both the Olympic and Commonwealth Games?

… that Ebenezer Place in Wick, Caithness, is officially recognised as the shortest street in the world, at a mere 206 cm (81 in.) in length?

From a Scottish waterfall three times the height of Niagara Falls to the last foreign invasion of Britain and the birthplace of the first Oscar-winning Welshman, The British Isles: A Trivia Gazetteer brings together hundreds of remarkable facts and feats each pertaining to a different location from across Britain and Ireland. As much an accessible and informative reference book as it is an entertaining miscellany, it aims to expand our knowledge of these extraordinary islands while uncovering and celebrating some of their most remarkable people and places.

'Lovers of Britain and British miscellany are sure to appreciate this collection of fascinating facts about the nation, its people, places and politics, culture, language and history.'

'this handy book has more than 1000 individual entries full of fascinating anecdotes and interesting trivia, and is ideal for anybody interested in the history and geography of the United Kingdom and Ireland.'