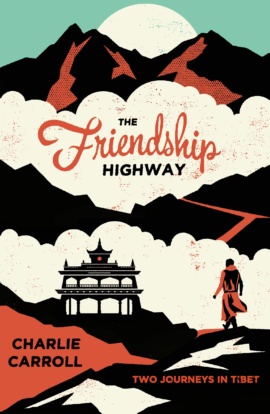 Tibet was not just on the horizon, it capped it. Four thousand metres above this city was a country of stone and ice, and, even though it was officially closed, there was still a way in.

A compelling and unforgettable encounter on the roof of the world…

Tibetan-born Lobsang fled the volatile region over the Himalayas, on foot, as a child in 1989. An exile in Nepal, then a student in India, he was called back to Tibet by love. At the end of the road known as the Friendship Highway, he met Charlie and recounted his extraordinary life story, exemplifying the hardship, resilience and hope of modern Tibetan life.

Charlie Carroll is the author of The Friendship Highway (Summersdale, 2014), No Fixed Abode (Summersdale, 2013) and On the Edge (Monday Books, 2010). He has written for The Guardian, The Big Issue and the Daily Mail, been featured in National Geographic, The Telegraph and The Times, has discussed his work on BBC Radio 5Live and various local radio stations, and has appeared at a number of literary festivals across the UK.

‘I loved the picture he paints of Tibet, with its glorious natural beauty, its mountains and snow, its prayer flags and jade necklaces …. This flowingly-written book certainly made me want to go there…’

'This is a mighty read.'

We Love This Book

'this is a rare and extraordinary account of life in Tibet as told by a local and recorded by a travel writer.'

'Charlie Carroll turns out to be a superb storyteller and his re-telling of Lobsang’s tragic life-story is hauntingly evocative, whilst the device of telling his own story alongside leaves the reader both touched and hugely well informed about the culture, history and recent politics of Tibet.'

'In a good piece of travel writing, the reader accompanies the author on a perception-altering journey and this book certainly achieves that.'