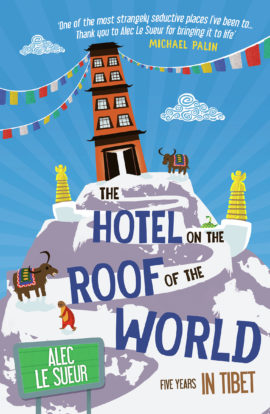 The Hotel on the Roof of the World

The very aptly named Mr Pong had the kind of breath that could stun at over ten meters… This wasn’t just bad – there was something rotten down there. Something had crawled in and died. Gunter howled with laughter as he saw the look of horror on my face. It was the best entertainment he had seen since he had watched Chef chasing yaks through the kitchens.

Few foreigners are lucky enough to set foot on Tibetan soil, but Alec Le Sueur spent five extraordinary years there, working in the unlikeliest Holiday Inn in the world. Against the breathtaking beauty of the Himalayas unfolds a highly amusing and enlightening account of his experiences.

Fly infestations at state banquets, unexpected deliveries of live snakes, a predominance of yaks and everything yak-related, the unbelievable Miss Tibet competition, insurmountable communication problems and a dead guest are just some of the entertainments to be found at the ‘Fawlty Towers’ of Lhasa.

Le Sueur, the only Westerner since the days of Heinrich Harrer to spend so long in Tibet, examines the country’s intriguing cultural background, providing a fascinating insight into a country that was only just opening up to the outside world.

Alec Le Sueur started a promising career in luxury hotels, with positions in London, St Tropez and Paris, until one fateful day he took the unusual career choice of leaving Europe to join the management team of the infamous Holiday Inn Lhasa. He spent five years in Tibet, the subject of his first book, The Hotel on the Roof of the World, before returning to his native island of Jersey. A further career change led Alec to swap VIP guests for lawyers and to acquire an MBA in law firm management. He gives frequent talks on his time in Tibet and is a regular contributor to Food & Wine magazine. He also writes articles on management and strategy for exciting law journals

'This read has been compared to Fawlty Towers and then rated as funnier. I'd have to agree.'

'This is a rip-roaring comedy of a book... Underlying the story is a heart-warming and sensitive understanding of the Tibetan people'

'This title follows in the footsteps of author Alec Le Sueur, who worked at the Holiday Inn Lhasa in Tibet for five years, where he had to deal with fly infestations at state banquets and unexpected deliveries of live snakes.'

'witty, detailed and often hysterical account of the daily disasters that occurred within the hotel's rat-infested walls'

'His entertaining tale provides a fascinating insight into the country.'

‘One of the most strangely seductive places I’ve been to … Thank you to Alec Le Sueur for bringing it to life.’