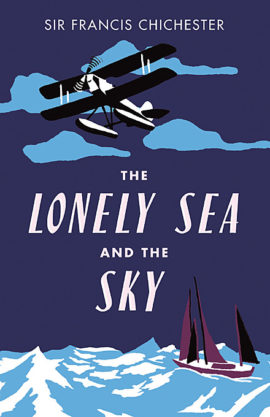 The Lonely Sea and the Sky

The complete autobiography of the great adventurer Sir Francis Chichester, the first and fastest man to singlehandedly circumnavigate the globe.

Aged 18 and with a taste for adventure, Francis Chichester emigrated to New Zealand with ten pounds in his pocket. He tried his hand at a number of ill-fated careers -a boxer, shepherd, lumberjack, and gold prospector, to name a few before returning to England. Having qualified as a pilot, in 1929 he embarked on his most famous solo flight in the de Havilland Gipsy Moth from England to Australia. Shortly afterward, he survived a near-death catastrophe in an attempt to fly solo around the world. Turning to sailing, he won the first single-handed transatlantic yacht race in Gipsy Moth III, despite having been diagnosed with cancer two years previously. In 1967, he became the first person to sail around the world solo from west to east via the great capes. Here, his entire life – including his greatest failures and successes – are told by the man who experienced it all first hand. A foreword from his son, Giles Chichester, is also included.

'The Lonely Sea and the Sky is the acclaimed autobiography of this iconic postwar figure.'