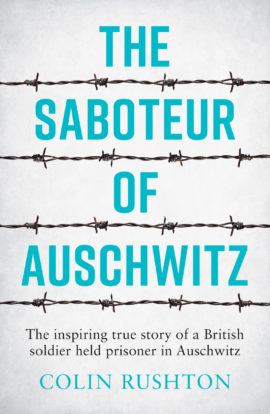 The Saboteur of Auschwitz

For fans of The Tattooist of Auschwitz, The Librarian of Auschwitz and The Choice, this is the incredible true story of a British soldier POW.

In 1942, young British soldier Arthur Dodd was taken prisoner by the German Army and transported to Oswiecim in Polish Upper Silesia. The Germans gave it another name, now synonymous with mankind’s darkest hours. They called it Auschwitz.

Forced to do hard labour, starved and savagely beaten, Arthur thought his life would end in Auschwitz. Determined to go down fighting, he sabotaged Nazi industrial work, risked his life to alleviate the suffering of the Jewish prisoners and aided a partisan group planning a mass break-out.

This shocking true story sheds new light on the operations at the camp, exposes a hierarchy of prisoner treatment by the SS and presents the largely unknown story of the military POWs held there.

Colin Rushton was a metallurgist by trade with a great entrepreneurial spirit, having worked in many different roles and trades throughout his life, as well as being an aspiring writer for many years before his retirement at the age of 53. He shared a life full of love, laughter and adventure with his soul mate Pat, his 2 adored children and 3 treasured grandchildren. His love of bowls was the meeting place for the protagonist of his first published work, Arthur Dodd, whose extraordinary story he told in The Saboteur of Auschwitz

'A human witness to inhumanity: Arthur Dodd’s account is another important piece of evidence.'

'Colin Rushton’s masterly account… is a harrowing addition to public knowledge of the Holocaust.'

'It is a riveting story and it is true.'

'If we do not remember the past, we will repeat it. Truly an extraordinary book.'

Defence Focus, the House Journal of the Ministry of Defence

'Simple sentences add a terrible innocence in keeping with Arthur’s ordinariness, struggling against the unimaginably extraordinary. History will be grateful that Arthur Dodd’s story was told.'