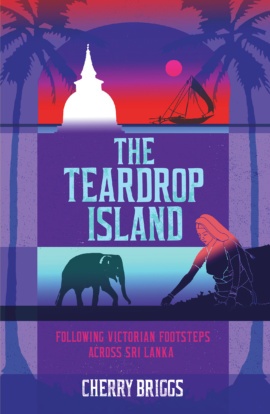 Mr Fernando led me into a dark room that was lined with book-cases and smelled of leather and damp. The polished, concrete floor of the library was covered with white jasmine flowers that had blown through the windows during the storm. He began to select from the shelves a collection of disintegrating books. ‘If you are going to read any of them, it should really be this one,’ he said as he passed me two thick volumes, embossed with gold lettering and spotted with damp. The work was simply called Ceylon and was written by an Irishman named Sir James Emerson Tennent, who had been sent to the island in 1845 by Her Majesty’s Government.

The Teardrop Island follows in the footsteps of the eccentric Victorian James Emerson Tennent, along a route which takes Cherry to pilgrimage trails, into tea estates and rural regions inhabited by indigenous tribes, as well as through restricted areas of the former warzone, delving under the surface of the contemporary culture via cricket matches and fortune tellers.

Cherry Briggs worked as a Biology teacher in Oxfordshire until the cold, grey skies got the better of her and she went in search of warmer climes. Being a keen cyclist she got on her bike and cycled around Asia until she finally settled in Sri Lanka. Much as she loved the island however, her feet soon became itchy and she now lives high up in the Andes in Bogota, Colombia.

'A fascinating and enjoyable read from an articulate and entertaining writer.'

'Inspired by the Ceylon travels recounted in the mid-1800s by Irishman James Emerson Tennent, Briggs not only touches on Sri Lanka’s deep and colorful history but also details her modern-day encounters with people and street scenes, venturing from the island’s south coast to the capital city of Colombo and all the way to its war-torn northern and eastern coasts, where travel has been severely restricted by the Sri Lankan army.'