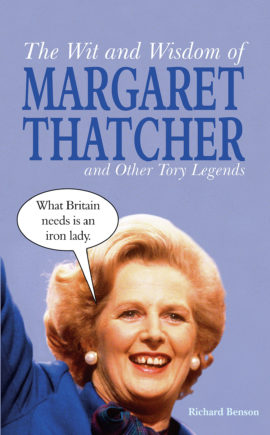 The Wit and Wisdom of Margaret Thatcher

And Other Tory Legends

‘Being powerful is like being a lady. If you have to tell people you are, you aren’t’

Margaret Thatcher, UK prime minister 1979-1990 and leader of the Conservative Party 1975-1990, was the only women to hold either post, and was re-elected for an unprecedented third term, earning her a place in British history as one of the most extraordinary figures of the late twentieth century.

This collection gathers together pithy and often witty quotations by the outspoken Iron Lady and fellow party members-many of them still surprisingly relevant today.

Richard Benson is a retired teacher, based in Suffolk, with a wealth of anecdotes from his professional life, which have fuelled the phenomenally successful F in Exams series. He's also a keen amateur cricketer.

'For admirers and detractors alike, here is a primary weapon - the lady's own words… Love her or loathe her she was a phenomenon, here packaged in a compact, pocket-sized hardback. It might be that every home should have one.'