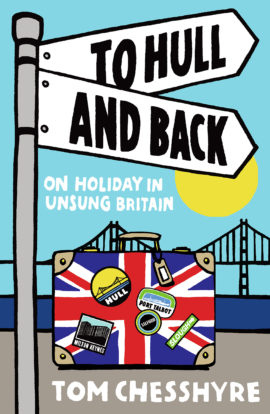 To Hull and Back

On Holiday in Unsung Britain

… one of the best ways to get to know a country is to take yourself to the less touristy, less obvious destinations. And let’s face it: things don’t get much less touristy than Slough…

As staff travel writer on The Times since 1997, Tom Chesshyre had visited over 80 countries on assignment, and wondered: what is left to be discovered?

He realised that the answer might be very close to home. In a mad adventure that took him from Hull to Hell (actually a rather nice holiday location in the Isles of Scilly), Tom visited secret spots of Unsung Britain in search of the least likely holiday destinations. He got to know the real Coronation Street in Salford, explored Blade Runner Britain in Port Talbot, discovered that everything’s quite green in Milton Keynes, met real-life superheroes and many a suspicious landlady, and watched a football match with celebrity chef Delia Smith in Norwich.

With a light and edgy writing style Tom peels back the skin of the unfashionable underbelly of Britain, and embraces it all with the spirit of discovery.

Tom Chesshyre’s train travels include an 11,000-mile jaunt around Europe for his book on the European high-speed train revolution, and thousands of miles more across the UK for his weekly hotel column in The Times. Tom has visited 94 countries for his writing.