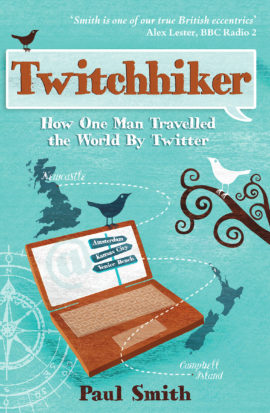 There were five rules of Twitchhiker:

Bored in the bread aisle of the supermarket one day, Paul Smith wondered how far he could get around the world in 30 days through the goodwill of users of social networking site Twitter. At the mercy of these rules, he set his sights on New Zealand – the opposite point on the planet to his home in Newcastle. All he had to do next was explain the idea to his new wife.

In an adventure wrapped in nonsense and cocooned in daft, he travelled by road, boat, plane and train, slept in five-star luxury and on no-star floors, shmoozed with Hollywood A-listers and was humbled by the generosity of the thousands who followed his journey and determined its course.

@twitchhiker I can send you to Wichita by Greyhound if that’s any good… Sent 10:13 AM Mar 12th

I was more or less in the exact geographical centre of a different continent, and a nameless woman some 4,000 miles east in Dublin was buying me a bus ticket…

'He made it from London to New Zealand. Yet more amazing, he sounds like a decent, modest witty guy.'

'Genuinely funny... easy-to-read and hard-to-put-down... it's unremitting and utterly addictive.'

'Smith flies, sails, rides and begs his way across the globe.'

'I really enjoyed the book and have been spreading the word. Amazing.'

Martin Kelner, columnist for The Guardian

'Smith is one of our true British eccentrics and should be saluted. He is fearless and possibly quite mad.'